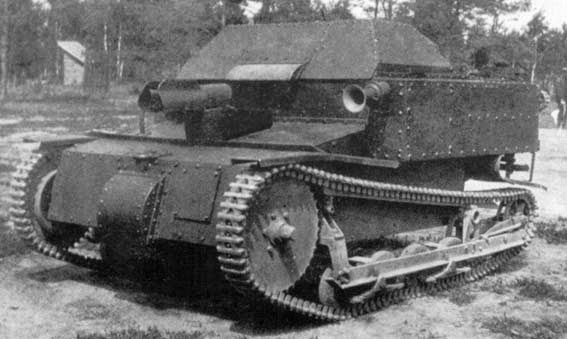 A continuous track, otherwise known as a tank tread or caterpillar track, is a band of tread around two or more wheels that propels a vehicle forward.  This technology is highly important in the advancement of warfare, especially in the development of armored tanks, and in the advancement of agriculture, moving from hand tools and animals to the more efficient and quick tractor.
The tread on a continuous track is made of steel plates or rubber reinforced with steel wires.  Weight is distributed more evenly in vehicles that have continuous tracks due to the increased surface area tracks supply, and this enables such vehicles to move across soft and/or uneven terrain with a lessened likelihood of sinking or flipping.

In 1877, Russian peasant Fyodor Abramovich Blinov invented a "wagon that moved on endless rails".  His original design had horses pulling the wagon, and he received a patent in 1878.  He later created a steam powered tractor on continuous tracks; it was featured at a farmers' exhibition in 1896.  Although he successfully invented and got patents for a continuously tracked vehicle, the idea had been around since the late 1700s.  Only around forty years prior to Blinov's success, a Russian captain Dmitry Zagryazhsky received a patent for a similar tracked vehicle, but manufacturers weren't interested.